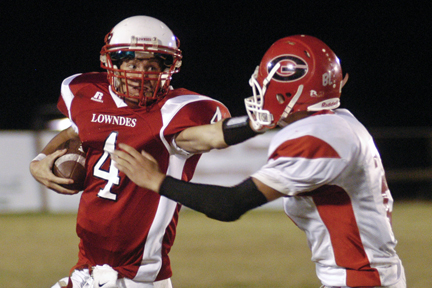 Lowndes Academy quarterback Hank McIntosh gives the stiff arm to an Abbeville Christian Academy General on the way to a 46-32 victory for homecoming.

After a slugfest first half with lots of offense and little defense, the Lowndes Academy Rebels pulled away from the Abbeville Christian Generals to collect a region win for homecoming 46-32 Friday night.

“We got the win. We didn’t play good at times. We let them rough us up a little bit,” said Lowndes Academy head football coach Art Sullivan. “They out manned us some.”

The Rebels trailed 26-20 at the half. And actually fell two touchdowns behind 32-20 early in the third quarter.

“We can score, but we have a hard time stopping people,” said Sullivan. “We’ve just got to keep working on defense, and some of the kids have to grow up a little bit and get a little tougher, and we’ll be alright down the stretch.”

After the Generals’ last scored at the 11:34 mark of the third quarter, the Rebels benefited from a long pass play and facemask call against Abbeville to put themselves in business at the Generals’ 11-yard line.

Then on first and goal from the 1-yard line, Toby King went into the end zone standing up. Cody Harrell, who was good on four out five point after kicks, made it a 32-27 ballgame at the 6:58 mark of the third quarter.

Lightning struck the General when Garrett Nall picked up a fumble to set the Rebels up at the Abbeville 2-yard line.

Garrett Headley took it in from there. And with the point after by Harrell, the Rebels led to stay 34-32 at the 6:37 mark of the quarter.

But the point of no return for the Generals came when trailing by 8 points with 4:23 left in the contest. The Rebels forced the ball over to them on downs stopping the Generals on a fourth down with 4-yards to go at the Rebels 33-yard line.

The Rebels rubbed salt into the wound when King scored on 5-yard run with 16 seconds in the game to make it a 46-32 final.

On the night King had 17 rushes for 91 yards and two touchdowns including a 1-yard run and a 5-yard run. He had one reception for a 56-yard touchdown. And he had seven solo tackles, four assists and an interception.

Garrett Headley had 10 rushes for 65-yards and a 2-yard touchdown. He had four receptions for 31 yards.

Hank McIntosh had nine rushes for 78 yards, including a 65-yard touchdown run. He was 10 of 15 passing for 140 yards, one touchdown and one interception.

Garrett Nall two rushes for 15 including a 10-yard touchdown. He also had two fumble recoveries.