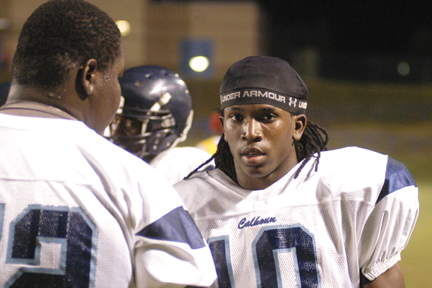 Calhoun's Jamichael Jackson rests for a moment on the sideline.

The Wilcox Central Jaguars pulled away from the Calhoun Tigers in Camden Friday night to secure their first victory of the year 28-18.

“We can’t play 48 minutes. We don’t know how to play 48 minutes,” said a disappointed Calhoun head football coach Bill Williamson. He had just seen his team fighting back, taking the lead, but ultimately falling for the fifth time this season.

On the other side of the coin, Wilcox Central head football coach Charles Graves saw his team get its first win to go 1-4 on the season.

“I credit our defense for coming around in the second half,” said Graves. He also had praise for his offensive line.

While Graves said his team still made mental mistakes, he said Friday night was what his team needed to learn, “how to play in close games and close them out.”

Graves recognized Cornelius Moye for how he ran the football and called quarterback Jarvis Ross “a special kid.”

Williams recognized the play of Jamichael Jackson and Jalen Mason for Calhoun.

After a scoreless first quarter, the Jaguars drew first blood on a 14-yard pass from Jarvis Ross to Jordan Ross. Freddie Smith added the point after kick to make it 7-0 lead at the 10:54 mark of the second quarter.

But the Tigers came right back less than a minute later when Jamine Jordan scored on long kickoff return at the 9:55 mark of the second quarter to make it a 7-6 contest.

Jamichael Jackson put the Tigers on top 12-7 with a 65-yard interception return at the 8:10 mark of the second quarter.

But the lead would change again when Moye scored from 7-yards out to put the Jaguars back on top 13-12.

The topsy-turvy play continued when Jordan hit Jalen Mason on a 36-yard pass play to put the Tigers up 18-13 at the 3:14 mark of the third quarter.

Unfortunately for Tigers, they would never lead again.

Jarvis Ross scored on a 5-yard run at the 9:48 mark of the third quarter and Smith added the point after kick to put the Jaguars on top 20-18.

Calhoun would threaten once more driving to the Wilcox Central 5-yard line only to be turned away.

Moye would go in standing up for Jaguars on a 21 yard run at the 6:14 mark of the fourth quarter and Jarvis Ross scored the 2-point conversion to make it a 28-18 final.