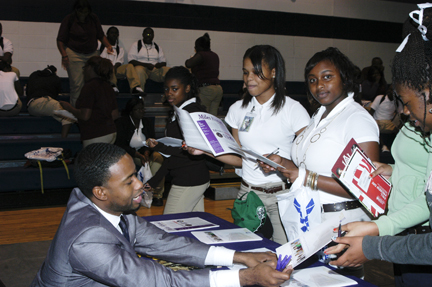 “The purpose of career day is to allow our students to see all of the career choices available to them and see what the college have to offer them,” said Curtis Jackson, guidance counselor for The Calhoun School.

He said all totaled there were about 340 students including juniors and seniors from Central and ninth through 12th grade from The Calhoun School.

“It was a pretty good response, considering we’re four hours away and lot of students haven’t heard of us,” said Adam Goodman of the University of North Alabama in Florence. “Maybe some will come and check us out.”

Tyler Argent of the University of Alabama said the students who attend career day mostly learn “the enrollment process itself, how to apply, the requirements, the scholarship opportunities we offer.” He said information was also provided about the campus and student life.

“I’m looking for a college I can go to. I’m majoring in accounting, and I want to go to Alabama for college,” said Jamarcus Williams, a football player for Central High.

He said he wanted to make a good score on the ACT of 24 or above and that he has a 3.3 grade point average. He said also wanted to find out about the schools, what they require and how much it costs.

Anthony Hayes of The Calhoun School said career day represented “a bright future” for him, what he wants to accomplish when he gets out of high school. He said there were a lot of good schools represented, but he was interested in the University of South Alabama and Trenholm State Technical College.