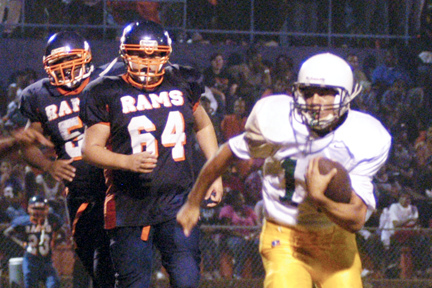 Tracey Tillman carries the ball for the Lions.

In a contest marred by penalties and turnovers, the Francis Marion Rams held off the Central High Lions 30-24 in a 2A Region 4 tilt in Marion Friday night.

It was a game in which one coach felt his team did not play to its ability and another who thought his kids played better.

“Right down to the wire,” said Rams’ head football coach Javaris Jackson of the battle his team found itself in with the Central Lions from Hayneville. But he made it clear he was not happy with the performance.

“You know we kept fighting, kept pushing, you know made plays at big times, but we did not play to our ability tonight,” said Jackson.

Still he gave credit to quarterback Radge Turner. And he said, “My defensive was up and down tonight, but when it was time to make big plays, they made big plays.”

Jackson also recognized running back Darius Billingsley who came back from a knee injury and having to sit out last week to score two touchdowns.

“They played a whole lot better. We’re just going to have to come out and work harder, ” said Central head football coach Keith Scissum. “We’ve got to get in shape…but they played good.”

Scissum had praise for Terraris “T.J.” Saffold, who accounted for all the Lions’ points.

“T.J. stepped up tonight,” said Scissum. He also noted to play of Quintin Carter running back/linebacker. And he said, “Just as a team we stuck together. Our offensive line did a better job.”

The Rams and the Lions fought through a scoreless first quarter. And Central jumped out on top on a 63-yard touchdown run by Saffold, who added the 2-point conversion, as well, at the 11:31 mark of the second period.

The Rams answered 59-yard touchdown run by Billingsley. The 2-point try failed and the Lions led 8-6.

A blocked punt led to another Francis Marion score when Dakota Duncan pounced on the lose ball in the end zone. Turner added the 2-point conversion to put the Rams up 14-8 at the 8:20 mark of the second quarter.

Central would fight its way back when Saffold scored on 74-yard run. He added the 2-point conversion himself and it was a 20-16 contest with 8:05 remaining in the third quarter.

Saffold found the end zone again on 12-yard run and went in standing up for the 2-point conversion to put the Lions up 24-20 at 2:15 mark of the Third quarter.

The Rams would go up on top to stay however on 77-yard pass play to Evans to make it a 26-24 contest at the end of the third quarter.

The Rams scored four more points on two safeties against the Lions to make it a 30-24 final.