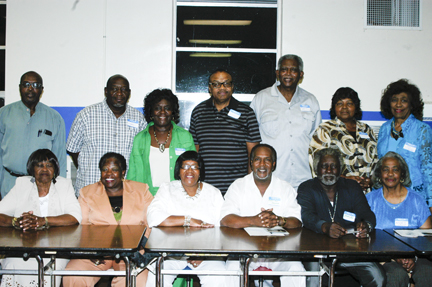 The Lowndesboro School which dates from 1883 and which remained in operation until the 1967, has earned a place both in history, as well as in the hearts of those who attended it. Saturday, a reunion dinner and dance held in Hayneville where memories of students who attended the school in the 1940’s and 50’s were shared was a step toward its preservation.

Alumni of The Lowndesboro School gathered at Hayneville Middle School for the event held “to encourage the participation of former Lowndesboro students, teachers and other citizens who may have an interest in the preservation and restoration of the school,” said Josephine Bolling McCall, who is working toward that goal.

McCall, who serves as executive director of The Elmore Bolling Foundation, has hopes to put the building to good use for historical, educational and tourism purposes for Lowndes County.

Recently, the historic building, located in Lowndesboro about 200 feet from the also historic CME Church, was donated by owners Lucius and Myrtle Evans to The Elmore Bolling Foundation at the Rufus Lewis Library in Montgomery.

“To date The Lowndesboro School Alumni Association has not raised any money,” said McCall. “However,” she said, “a pledge was signed May 28, 2011 to support the ‘matching Fund’ effort for the National Trust Preservation Fund Planning Grant. We have got to begin fund-raising efforts.”

McCall said the National Historic Trust Fund has donated emergency funds for stabilization and half the money for an architect to do a historic structure report. However, she said, matching money must be provided for that.

She said the report would assess the building and tell The Elmore Bolling Foundation what it needs to “preserve and renovate it.” She said they have been asked to keep all of the original materials that they can.

She said the report would probably show that about $200,000 to $300,000 will be needed to preserve and restore it and “that’s where the fund-raising begins.”

The Gwyn Turner Preservation Funds for Alabama is providing stabilization funds of $1,000. But matching funds to hire an architect of $1,800 must be matched dollar for dollar, according to McCall.

“One feature of the program (Saturday night) included ‘reflections’ from students about events that happened at the school during their attendance,” said McCall. “Almost all talked about how much emphasis the two teachers placed on our not just learning but excelling in school. So another major purpose was to form a camaraderie among attendees which resulted from a previous common experience.”

“I was there from the fourth to the seventh grade,” said Mary McGhee Aaron, “and that was back in the 50’s.”

When asked if the school really only had two rooms when she attended, she said, “It was just that little, and it had two rooms.”

She recalled the two teachers, Clara Scott, who taught through the third grade, and Clara McGinnis (Bell), who had the fourth, fifth, sixth and seventh grades.

Aaron said she lived in a rural area and had to walk to school every morning. “And when we got there, it was very cold,” she said.

But she also said Scott’s mother would have already gone to the school and made a fire.

“We had a big old pot-bellied heater,” she recalled. She said the whole school would be warm when the children arrived.

“So everybody would go in Miss Scott’s room for devotion,” continued Aaron. “And Miss Scott would always have the news from the paper. When we finished our devotion, she would always stand up and tell us everything that was going on, all the news in the paper and everything, everybody died, whose funeral was attended.”

Then, she said, the older children in the upper grades would go to McGinnis’s room while the students in the lower grades remained in Scott’s room.

The lessons, she said, were “reading, writing and arithmetic.” She announced with a sense of pride that she was valedictorian of the seventh grade class in 1950.

“We had programs every Friday,” said Aaron. “Everybody would go to Miss Scott’s room for a program. And you have to say a recitation and sing a solo. You had to do that. I don’t care what you sang, but you had to do that.” She said before leaving school, everyone would sing, “Now our work is over, over for today…”

Robert Stewart, who graduated in 1947, shared similar memories of Scott’s classroom.
Aaron said one funny thing she remembered was a student named James Bain, who had to make a speech.

She said his speech was, “Had a pig, fed him on corn, got so fat till his tail dropped off. Give me a hammer. I’m going to get me a nail. I’m going to make my pig a homemade tail.”

By way of history of The Lowndesboro School: In August 1868, a contribution was made by the Southern Aid Society through the Freedman’s Bureau to help buy a building that had been built by Daniel Alexander and Mansfield Tyler to serve as a school and a church for “The Colored People of Lowndesboro.”

According to McCall, Tyler deeded the current property to the trustees of the Lowndesboro Colored Educational Association in 1883.

Dr. Mansfield Tyler was a black reconstruction legislator who represented Lowndes County in the Alabama House of Representatives from 1870-72.

The Elmore Bolling Foundation is a 501 (c) 3 organization that was organized in 2008.