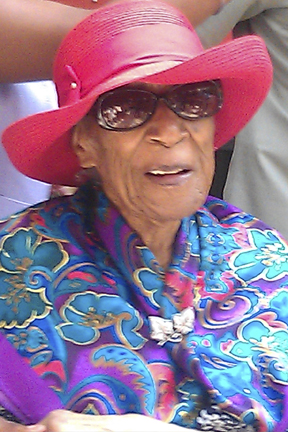 “Eating… sleeping… being nice to people.”

That is the secret to a long life from someone who should know, Susie Mushatt Jones, a native of Lowndes County, Ala., age 112.

On July 6, 2011, “Miss Susie,” as she is known, celebrated her 112th birthday, making her the person believed to be the “oldest living New Yorker,” according to the Congressional Record of the United States of America.

She now makes her home in Spring Creek, Brooklyn, N.Y.

United States Rep. Edolphus Towns rose on July 19 to recognize the accomplishment by the third of 11 children born in Lowndes County, Ala on July 6, 1899.

Towns said, “Being raised in the segregated South, Miss Susie developed a warm and kind heart from the love her mother and father expressed. Throughout her life she has been led by a basic principle of giving all that she has, while living an upbeat life.”

Michael R. Bloomberg, mayor of New York, wrote to her on July 19, “Happy 112th birthday and congratulations on such a momentous occasion!”

He wrote that in 1899 when she was born, the five boroughs of New York had just been incorporated “to make the New York City we all known and love.”

He also wrote, “You have lived through some amazing times and witnessed incredible changes in our world.”

And On July 6, Andrew M. Cuomo, governor of New York State wrote, “I commend the many celebrations you have made to your family, your community and to the great State of New York, as a longtime resident. Your energy and enthusiasm inspires all who have been so fortunate to know and love you, and I am honored to extend my best wishes for a memorable 112th birthday celebration and many blessings ahead.”

According to her niece, Margie Mushatt McDonald of Montgomery, Miss Susie was the daughter of Callie and Mary Mushatt, the third oldest child and oldest girl of five boys and six girls born in what was the Calhoun Community at that time.

She graduated from The Calhoun High School and later moved to New York.

She moved back to Alabama in about 1970 where she remained about for about seven years before moving back to New York.

Another reason for such a long life, McDonald said her aunt gives, is to, “Just believe in the Lord.”

While Miss Susie never had children of her own, she sent a lot of the children in her family to college, McDonald said.

When contacted at her home in New York for comment, Miss Susie asked, “You’re in Alabama?”

When the answer was yes, ma’am, she said, “I think I’ll come on down… that’s where I was raised.”

According to another niece, Selbra Mushatt of New York, Miss Susie did domestic work for the Andrew family in New York, taking care of their young children with whom she has remained close.

She also pointed out that upon graduation from high school in Alabama, Miss Susie had the opportunity to go on to college and to teach school. But she said her aunt decided to help her mother and father support the family.

When asked about the price of things from her time, Miss Susie said, “A nickel could buy as much as you wanted to buy.”

Though she said her eyesight has failed, and she doesn’t hear as well as she used to, Miss Susie remains active. Mushatt said her aunt voted for President Barack Obama in the last election.

As far as the secret to a long life, Mushatt points out that her aunt also never smoked or drank.