Hundreds turn out for Daniels Pilgrimage 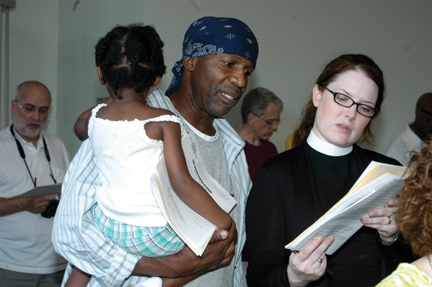 Titus Battle of St. Mark's in Birmingham with his "heavenly adopted daughter" Emily Smith Battle share prayer with the Rev. Robyn Neville from the Holy Trinity Parish Episcopal Church in Decatur, Ga. during a service of Remembrance, Repentance and Reconciliation in Hayneville on Saturday to honor the late Jonathan Myrick Daniels and other martyrs.

Saturday recalled a tragic day in the history of Hayneville and the civil rights movement in Alabama, but also a day of hope.

Led by the Rt. Rev. Henry N. Parsley Jr., bishop of the Episcopal Diocese of Alabama, a pilgrimage and procession with a service of remembrance, repentance and reconciliation was held for the Feast of Jonathan Myrick Daniels, martyr of Hayneville, and martyrs of Alabama.

Daniels was an Episcopal seminarian, who answered the call of the Rev. Dr. Martin Luther King to help register African-American voters in Alabama. He was murdered at the then Cash’s Store in Hayneville, shielding 16-year-old Ruby Sales from a shotgun blast as she attempted to enter a store to buy something to drink on Aug. 20, 1965.

“Well, it’s hope actually… hope that we can all come together and live in a unified society and love each other just as Jonathan did unconditionally so that he would willingly give his life for someone else… that kind of love,” said Fannie Davis of Burkville, who helped organize the event locally and who has been involved since its inception.

Bishop Parsley said the event in Hayneville has been enhanced and made bigger and ‘ever more significant’ over the years.

“Being a pilgrimage, it means we move around, that we go to sites where they are important,” said Parsley. “We start here at the courthouse lawn. Then we go to the jail where Jonathan and others were held. We go to the Cash store where Jonathan was killed… where he gave his life for Ruby Sales. Then we come back to the monument memorial on the corner that has been established for Jonathan. Then we go into the courthouse and have a service. Actually it is all a service with the communion and service in the courthouse where the trial took place…”

Carolyn Foster, a deacon in the Episcopal Church in Birmingham and co chair of the church’s commission on race relations, said it is their responsibility to organize this event every year to commemorate Daniels.