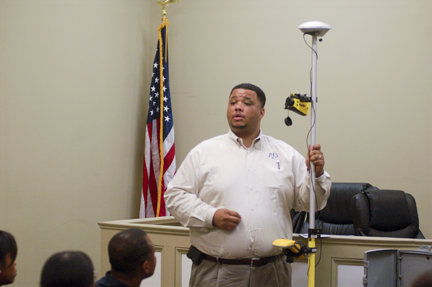 A2D founder and CEO Antwon Alsobrook shows off a GIS device used in surveying the territory to be covered by fiber optic cable.

Residents of Lowndes County got an opportunity to hear first-hand about the broadband initiative coming to south Alabama during a town hall meeting last Thursday night in Hayneville.

Along with representatives from A2D, Inc., the company that will be developing the broadband network, Alabama’s director of Rural Development Ron Sparks was also on hand.

“I hope you realize what is about to happen,” Sparks said. “The transformation will be phenomenal.”

Sparks compared the broadband project to the building of an interstate highway.

“You’ve got an information interstate that will come through your county and city, and it will change your lives,” he said.

Brian Watkins, a regional business development official with A2D, said that the projected completion date for the project is August 2013, and work is expected to begin in 30-45 days.

A2D’s Jerrald Rector said that A2D will begin a site survey soon, which will include contacting citizens to find out the needs of those who will be connected to the network.

“We will provide a schedule so that you know when construction will start in your neighborhood,” Rector said. “We’re doing everything we can to keep you involved.”

That involvement will be key, said Tony Shackelford.

“We understand that the biggest part of this project is education,” he said. “As we get in touch with the residents, we need to pinpoint their issues.”

Shackelford said he expects the county to have “about 87 percent” adoption of the broadband.
Part of the project includes a box connected to each house that would allow the internet to be converted from fiber-optic cables into a usable format.

Questions were also asked about the creation of jobs.

A2D founder and CEO Antwon Alsobrook said that A2D would have about 20 employees, but other jobs would be created through construction and support services.

A release from A2D states that the company expects 412 direct construction jobs in the first year and 120 jobs in year 2.

Job postings are available at www.a2dinc.com and www.ecommunityalabama.org, as well as through the Alabama Department of Labor.

Alsobrook also encouraged residents to give their input on service in rural areas.

“We need testimonies from people out in the county,” he said. “That helps build the case for expansion.”

A2D and the Broadband Commission are expecting to soon have a “family fun day” to continue getting public input and involvement.