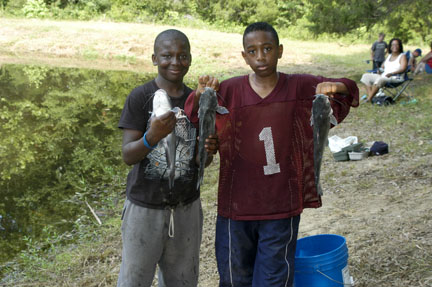 From left Kedrick and Codell Wilson, both age 12, of Jones, Ala., show off a mess of catfish caught at the Catfish Rodeo held at a pond on the Lowndes Wildlife Management Area in White Hall on Saturday.

About 40 youngsters, accompanied by adults, enjoyed a day of fishing at the 17th annual free Kids Catfish Rodeo on Saturday at the Lowndes Wildlife Management Area in White Hall.

The event was sponsored by the U.S. Army Corps of Engineers/Alabama River Lakes for kids ages 15 and under.

“It was a nice turnout,” said Ranger John Bennett. “The crowd was a bit smaller than we had (in past years), but fish were caught and everyone had a good time.”

Kids were allowed to fish, accompanied by a parent, said Little. And the event was held from 7 a.m. until 11 a.m. with hot dogs and soft drinks provided.

Rangers working the fishing rodeo were John Williams, Bennett, Little and Clint Maroney.
Adell Wilson of Jones, Ala. brought his two sons Codell and Kedrick Wilson, both age 12. They were hauling in catfish with liver for bait.

“We’ve been having fun,” said Adell Wilson. “It’s a blessing.”

The pond at which the rodeo was held was located off County Road 40 West and Henderson Road in White Hall.