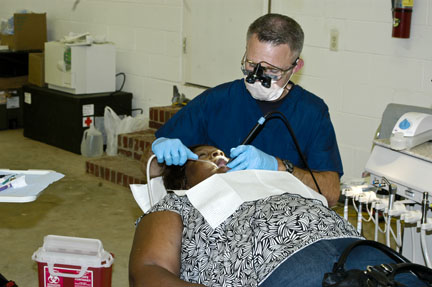 Loretta Burns of Selma gets some dental care from a Navy Reserve Officer during an Innovative Readiness Training program event held in Hayneville.

Active and reserve military personnel recently descended upon Hayneville to treat residents of Lowndes County and anyone else who could come to free medical care. Some 69 reserves and active military personal were on hand at Hayneville Town Hall May 3-10 to provide free eye exams, free eyeglasses, free dental care, medical care and medical screenings.

The mission in Hayneville was under the command of Lt. Col. Sherolyn Lange, chief nurse of the 176th Medical Group Alaska Air National Guard.

Represented, according to military personnel, were the Alaska National Guard, Marine Corp and Navy reservist, as well as active-duty Army, Navy and Air Force personnel from around the nation.
Mayor Helenor Bell of Hayneville said the IRT event was also partnership between the military and Delta Regional Authority.

“The impact is huge because you probably realize in our area we have a large part of our population that’s uninsured as far as healthcare is concerned,” she said. “So this is allowing them to get their healthcare needs taken care of.”

She also said an engineering piece to the IRT, “is helping us to actually evaluate our sewer system, as well as repair some of the lines that are in need of repair.”

She said the military also repaired certain buildings around town.

Capt. Callahan said, “The most important word to a guard or reserve member is readiness.” He said they need to ready to respond overseas as well as to disasters at home.

“What is unique about this program, ” he said, “is it lets us get the training we need anyway while at the same time putting those skills to use to help real people in real world situations.”

Lt. Col. Lange said, the town of Hayneville has been very open. She called the program a two-fold benefit for the taxpayers’ dollars.

She said all 69 military personnel were being housed by Hayneville Baptist Church.

District 69 State Rep. David B. Colston said of the IRT program, “It’s great for the community. It’s especially great for people who don’t have insurance.”