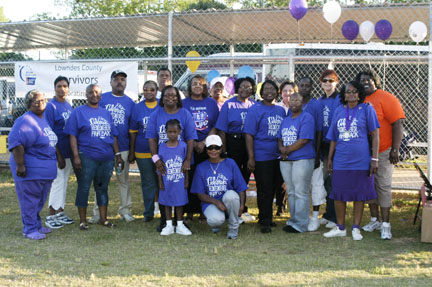 Many who survived cancer came out to show support for the American Cancer Society Lowndes County Relay for Life in Hayneville on Friday night.

Some 16 teams participated in the American Cancer Society Relay for Life for Lowndes County held in Hayneville on Friday night, and for the first time exceeded their goal.

According to Barbara Williams of Hayneville, event chairman for Lowndes County and a cancer survivor, the event exceeded its goal of $30,000. She said that was a first.

The theme for this year’s event was “Carnival For A Cure.” And the winning team, said Williams, was The SWAC Team led by Captain Suoliver Jackson of White Hall.

Among those touched by cancer was Patricia Farrior of Hayneville who has been a breast cancer survivor for 11.5 years.

“I have some good friends that I lost from cancer, and it means more to me to remember them, the relay, than it does thinking about myself.” She said she lost one to breast cancer and another to leukemia. “This time of year I think more about them and wish they were here. And hopefully relay will do something to help someone else and someone will survive, something, a cure will be found.”

Another is Veronica Bell Brown of Hayneville who has been a survivor for three years with lung and breast cancer.

She said of Relay for Life, “It means surviving. Surviving is a fight for a cure.”

Williams, a four year survivor of cancer said, “Being a part of Relay for Life lets me know that there are a lot of other people in the county who have survived this deadly disease and we have something to celebrate. Each year that we come to relay we know that we’ve made another birthday.”