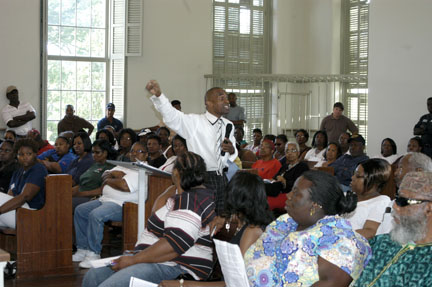 Mayor Walter Hill of Mosses excited the crowd as he discussed the high power bills suffered by county residents and concerns regarding Pioneer Electric Cooperative.

A near capacity crowd filled the main courtroom. The County Commission requested the CEO and board of trustees of Pioneer Electric Cooperative, including those representing Lowndes County, attend the hearing. However, the cooperative sent Angela Green, a communications specialist to appear on its behalf.

In a letter to King, Steve Harmon, executive vice-president and general manager of Pioneer Electric Cooperative, wrote, “As you know, I have explained our position to you on numerous occasions, and I have personally met with other leaders within the county many times to answer the same questions. Given this fact, I feel it to be counterproductive to our cooperative for me, or our board of trustees to attend your meeting.”

Patricia Young of White Hall asked what the difference was between a corporation and a cooperative? Green explained that a cooperative provides electrical service to its customers at cost.

Green said Pioneer is losing members. But she said the cooperative was not created to make a profit, but to serve an area no one else want to serve.

An example of concerns raised was one by a lady from the Collirene area who said in April of 2010 she got a $1,000 light bill without running her air conditioner or anything.

King said the commission tried to reach out to Pioneer and let them answer the people.

“The people are hurting,” King said.

He said, “We can’t tell the people why I got to pay a disconnect, a reconnect.” He said the commission tried to be “respectful” and invite the board, “who could answer the questions.”
King said, “But they are not working with us. ”

Commissioner Robert Harris said the commission would review the transcript of the public hearing to see what they come up with.

“Basically we were disappointed because, you know, we wasn’t given real answers,” he said.
He said Green did not have the details that other people in charge would have.

“And I think that it’s a slap in the face and a disrespect to the people that they service for them not to come to this questioning,” Harris added.

He said the commission would do whatever it took within the law to get some resolution.

“Tonight was a way for young management such as myself to be here and hear it first hand.”

She said she was not in the position of the CEO or general manager or the board to make the decisions.

“However, I am in the position I was hired for to hear the issues… I can take those concerns that we are very much aware of and take it back to management and be able to discuss things,” Green said.

Tyrone C. Means, an attorney was on hand for the hearing on behalf of the commission, said, “The commission asked me to come to review the problem. We’ll look at avenues to hopefully redress the issues.”

A list of wants by the commission was ready by Commission Administrator Jackie Thomas, including accurate reading of meters, fair assessment of charge per kilowatt hour, (alleged) mismanagement accounted for by the actual culprits and not the membership, courteous treatment of members, refund or credit to member’s overcharge, membership friendly reports-financial and administrative, such that activities of the directors and officers of cooperative are transparent, withdrawal from outside activities that are not within the core mission of cooperative -that is to provide electric power to members.

By Fred Guarino The Lowndes Signal An EF 0 tornado touched down in Lowndes County on Friday, April 15, according... read more