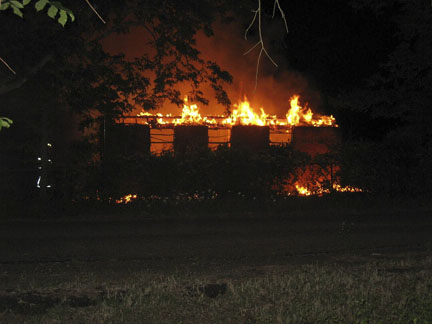 A fire that started around 2 a.m. on Tuesday resulted in a total loss for the family.

An early-morning house fire in Burkville has resulted in a total loss for a local family.

“We were there within four minutes of the page going out from 911, and the house was pretty well consumed at that point,” said Burkville fire chief Lamar Hall. “It was a very quick burn.”

The McCall family was at home at the time, but all three members of the family were able to escape before the roof of the home collapsed.

The cause of the fire is still under investigation, though Hall said it may have started in the home’s wiring.

“A neighbor mentioned that he thought the home was built with aluminum wiring, which melts under extreme heat while copper doesn’t, and the only wiring we could see in the house was some copper wire near the back,” Hall said. “That certainly raises a suspicion about what caused it, but we don’t know for sure.”

The family suffered a total loss and is in the process of setting up an account for donations at a local bank.