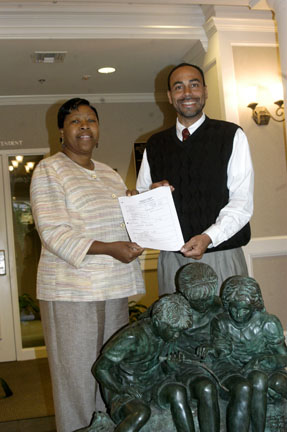 A $10 million U.S. Department of Education grant will provide incentive to teachers, support personnel, cafeteria workers and bus drivers in the Lowndes County School System and ultimately help Lowndes County students to compete not only in Alabama but also nationally.

Lowndes County Schools have received and are in the planning year of a $10 million Teacher Incentive Program grant.

Dr. Daniel Boyd, Lowndes County Superintendent of Education, said his school system competed against 2,000 other school systems across the nation for the grant, which will be spread over a period of five years.

He said only 60 such grants were awarded nationally, and Lowndes County was one of only two school systems in Alabama to receive the grant. Butler County was the other, he said.

Boyd said this grant deals with teaching and learning, “and it’s based on merit.”

The bonuses will also be based on the amount of prescriptive professional development a teacher receives, observations of teacher performance in the classroom and the attendance of the teachers, he said.

“However we realized that for student achievement to increase, everyone has to work together hand in hand. Therefore we added in the request that we include support individuals, such as paraprofessionals, secretaries, cafeteria workers and bus drivers.” Said Boyd.

He said cafeteria workers and bus drivers who attend professional development and have good attendance would get a bonus.

“I’m very excited. This is another grant that the Lowndes County Public Schools District has received that will enable our effective teachers to continue to be effective and to bring about student achievement… to make our students competitive not only within the state but nationally,” said Mary Phelan Jackson, coordinator of the Lowndes County Teacher Incentive Fund.

Jackson said her job is to make sure all the pieces come together when looking at the performance based compensation system. The pieces include professional development, so students will be more impacted, teacher attendance and assessment data “so we have a true picture of the overall effectiveness of the teachers that are teaching our students.”

Boyd said Lowndes County Public Schools partnered with Alabama State University to seek the grant. “It enables us to attract, recruit and retain the best and brightest teachers in this area,” he said.