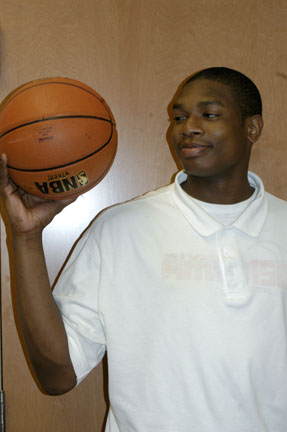 The event was aired on CBS Sports.

“I just wanted to go out there and show my talent because nobody knew about me for real down here,” said the 6’2”, 193 pound senior, who plays for Coach Toriano Baker’s 2A Central Lions.

Ball, who averaged 18 points, 12 rebounds and four blocks per game, hopes to play Division I basketball one day.

“I accomplished a good goal by winning it [the slam dunk championship]. A lot of people know me now,” said Ball.

Ball first showed his stuff for the national competition on a slam dunk video created by Baker over spring break.

Baker said he and his wife found out about the event through an email from MaxPreps and thought it was something that Ball should be able to do.

“We got a response back pretty quick that he was shoe-in,” Baker said following the submission of the video to the event coordinator.

Baker said the trip to Houston was Ball’s first time in a plane. He said they got first class treatment flying from Montgomery to Charlotte and from Charlotte, N.C. to Houston.

But Ball was almost eliminated in the semi-finals.

“Everything he tried, he landed the first time, except one… where he dunked over three guys,” said Baker.

Ball had about five seconds to land the dunk before he was eliminated, but he was able to land it.

Ball’s shining moment, a perfect 50 point score, came on a dunk that included tossing the ball, doing a back handspring, catching the ball on the first bounce and reverse slamming it.

The back handspring “was our secret dunk that we had rehearsed…. We had made plans to get to finals before we even got there,” said Baker.

“I knew it was creative… I knew the flip would get the crowd’s attention,” said Ball.
Baker is high on his slam dunk championship.

“He is expected to go on a play Division I basketball after junior college and that’s what I’m expecting him to do. And it won’t be a surprise when he gets there,” he said.

Ball defeated seven other players from Michigan, Illinois, Arizona, North Carolina, Georgia, Texas and New Jersey, according to MaxPreps. He says he is interested in physical therapy as a field of study in college.

Ball and his Lions were 21-11 this past season.