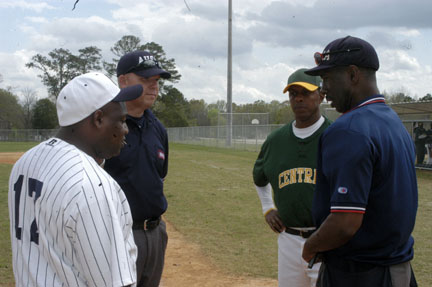 In a doubleheader that was delayed from the beginning of the season, Central High and The Calhoun School played their first rivalry high school baseball games on the Lowndes County Board of Education’s new baseball field in Hayneville on Saturday.

Calhoun was playing only its second game of the season, having lost to Goshen 22-17 the night before.

Central entered the game with a record of 1-5 having beaten Goshen 11-6 the night before.

But this day belonged to Central as the Lions won both games over the Tigers by scores of 20-8 and 21-9.

“I think everyone showed up,” he said, “because we lost some by one point.” The Lions fell victim to Selma and Lanier by one point each.

Winning pitchers for the Lions were Darius Bennett in game one, who was relieved by Solomon Sims, and Ken Gordon, winner in game two. Both games ended in five innings.

The field is located at the old Russell Elementary School site.

Board of Education member Ben Davis said Russell was closed due to declining enrollment and expenses. He said, “After doing that we decided it would be a great opportunity to build this complex for our young men and young ladies to develop their talents in this area.”

“We are excited about this,” Davis said.

He said the complex was built at a cost of $410,000 with Public School and College Authority Funds and Public School Funds from the state.