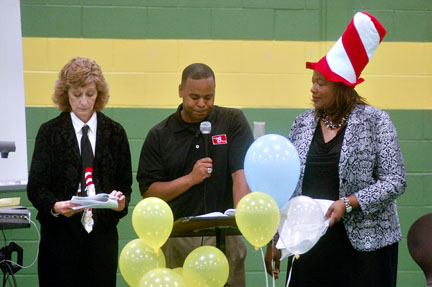 Dressed up in striped Dr. Seuss-style hats, Fort Deposit Elementary students participated in a program to kick off Read Across America on Wednesday afternoon.

The program was led by Melanie Sharpless, FDES’s library media specialist, and featured several other citizens from around the county.

The nationwide event was started in 1997 on Dr. Seuss’s birthday to help get students interested in reading.

Sharpless told the students that Seuss’s real name was Theodor Seuss Geisel, who was born in 1904.

The first book he wrote was “And to Think That I Saw It on Mulberry Street,” but it wasn’t an immediate success.

In fact, Seuss was rejected by publishers 43 times before it was finally printed.

“That just goes to show that you can’t give up the first time,” Sharpless said.

Following World War II, Seuss was inspired to write an easy-to-read book for children, which became “The Cat in the Hat.”

Later, he wrote another book that only used 50 different words to tell the story: “Green Eggs and Ham.”

Seuss’s stories teach life lessons like, “A person’s a person, no matter how small” (from Horton Hears A Who), diversity (One Fish, Two Fish, Red Fish, Blue Fish) and other lessons, Sharpless said.

“He published 44 books that have been translated into 20 languages and have sold over 100 million copies,” Sharpless said.

The students ended the assembly by taking the “Readers’ Oath.”