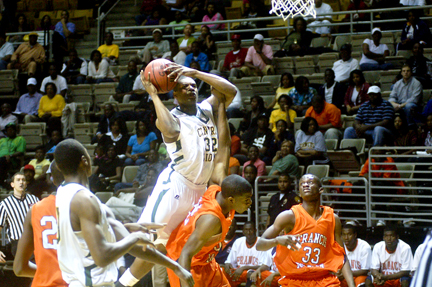 Central's Antjuan Bell gets fouled on a layup attempt.

Despite a hot start, the Central-Hayneville Lions were unable to hold off the Francis Marion Rams in the opening regional tournament game at Alabama State in Montgomery.

The Lions jumped out to a 16-7 lead at the end of the first quarter, but by the second period, Marion began finding their inside game.

LaDarius Tabb had a pair of back-to-back slam dunks to swing the momentum the Rams’ way and cut the lead to 20-18.

Down three points with time winding down, Marion held the ball for the last minute and a half of the second quarter and nailed a three-pointer to knot the score at 25 going into halftime.

Both teams played to a near draw in the third quarter, as Marion scored 15 points and Central had 14 points.

However, Tabb again swung the momentum his teams’ way with another pair of dunks.

In the final period, turnovers and missed free throws contributed to the Lions’ 58-44 downfall.

Central only went 5-14 from the free throw line in the second half after shooting 7-13 in the first half.

The Lions also struggled from the floor, shooting 34 percent compared to Marion’s 49 percent.

Wendell Snow pulled down the most rebounds for the team with 11, and Bell also had eight boards.