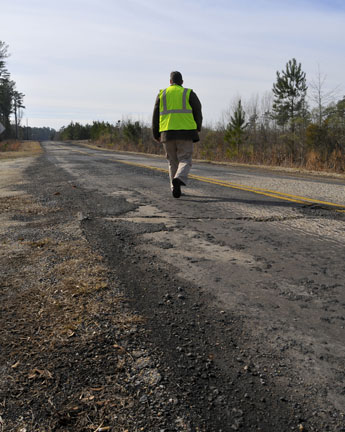 Dennis McCall, county engineer for Butler County, makes a morning inspection of Avant Rd., part of old U.S. 31. The county inherited the road from the state when a new U.S. 31 route was constructed. It is one of the worst roads in Butler County. (Photo, Kevin Pearcey).

By KEVIN PEARCEY
The Lowndes Signal

Dennis McCall turns his truck down Avant Road and the misery starts. A slow mile of rattles, pops, cracks, and back-jarring jumps along a stretch of road that shouldn’t exist in a nation that prides itself on progress.

But it does. And it’s not the only one.

“You don’t have to go far to find a bad road in Butler County,” says McCall, the county engineer, responsible for the impossible: holding together a rapidly deteriorating rural infrastructure.

That infrastructure, created over 60 years ago with the stroke of a pen through the Farm-to-Market act, is crumbling. Asphalt is chipping apart. Potholes patched one day, crack open again a few days later. Bridges are sinking.

But it’s not just a county problem, or a Black Belt problem, or a state one; it’s a national dilemma that’s reached crisis level.

A recent History Channel documentary, “The Crumbling of America,” cast light on a bleak future filled with collapsing bridges and degenerate roadways.

“We’re looking at a road system that was built with a lot of money in the Farm-to-Market era, but they were not designed to carry the loads and the volume of traffic that we carry on them today,” says McCall.

The Farm-to-Market program was ended in 1970, according to Association of County Engineers of Alabama (ACEA).

County road budgets, meanwhile, have remained stagnant, and are tied to a fluctuating gas tax that is based on gallons sold at the pump, not price per gallon.

A gas spike in the summer of 2008 with prices climbing as high as $4 per gallon of unleaded had county officials across the state scrambling to make up for budget shortfalls.

“The mistake people make is that they think our revenue increases when the price of gasoline goes up, which is not the case,” says McCall. “It actually decreases because people are driving less.”

McCall’s operating budget for fiscal year 2010-11 is $4.9 million. Give or take a few hundred thousand dollars, the budget is the same the county’s road department operated with 30 years ago, he says.

A department that once employed over 100 people now employs only 32.

Another kick in the head to rural counties was the re-distribution of the gasoline tax. All counties once received an equal portion of the state’s collected gasoline tax, but that changed in 1967 when an act by the Alabama legislature allowed counties with higher populations to receive a higher percentage of that tax.

The result is a cash-strapped rural roads department with little leeway in case of emergencies.

In Lowndes County, heavy rains washed away a portion of County Road 37 in the fall of 2009, leaving a jagged hole in the roadway.

The road has yet to be repaired. County officials lowered the speed limit from 45 mph to 15 mph on the road, while waiting for emergency funding to fix the problem.

McCall can sympathize. Flooding to several roads in Butler County in December 2009 caused over $450,000 in damage. A few weeks later, arctic temperatures froze the moisture trapped beneath those roadbeds, cracking the asphalt and causing potholes.

Both McCall and Butts says their departments are primarily in “maintenance” mode, something that is becoming increasingly harder to do.

“We’re just maintaining,” says McCall. “But there’s only so much you can do before the road fails and is unsafe to drive on.”

McCall’s department is responsible for 550 miles of paved roadways, Butts’ for 269. That’s not including the 260 miles of dirt road in Butler and the 150 miles in Lowndes.

There’s very little new paving or re-surfacing being accomplished, unless by workers on a state highway with state funds. Annual funding received through the federal government must be spent on “major collectors,” roads that funnel traffic around county seats, schools, shopping areas and link with other towns or cities.

The ACEA is making an attempt to educate the public and state legislators on the severity of the problem. In 2010, the ACEA compiled data from all 67 Alabama counties about the current condition of the state’s rural roadways and bridges.

“The results,” state the survey, “paint a gloomy picture for Alabama’s economic climate and the safety of those who travel throughout our state.”

The estimated costs, according to the date, to repair rural roads in each county is staggering. For example, in Butler County it would cost $90.2 million to resurface all paved roads and $6 million in annual costs to maintain the roads on a 15-year lifecycle.

For Lowndes, it would cost $43.2 million. For Dallas, $59.4 million. The data does not include costs to repair bridges.

“It’s a shocking number when you first see it,” says McCall.

Funding, especially the amount presented by the ACEA, is a significant hurdle to overcome and while voters in Alabama are generally aware of the rural road problem, they’re not sure how to address it.

In November’s General Election, voters defeated a bill that would have taken $100 million per year for 10 years from the Alabama Trust Fund for road and bridge construction.

And – if Butler County is any indication – state voters aren’t likely to support an increase in taxes.

In a survey conducted by the Butler County Commission last year, the majority of responders reacted negatively when asked if they would favor a sales or property tax increase to resurface the county’s roads.

Which means the issue is something new Governor Robert Bentley and a Republican-controlled state legislature will have to address.

“I’m holding out hope that this new legislature and administration will be more help to the counties,” said Butts.

Meanwhile, Butts, McCall and their fellow county engineers will keep patching, repairing, and maintaining rural roads with no new funding on the immediate horizon.