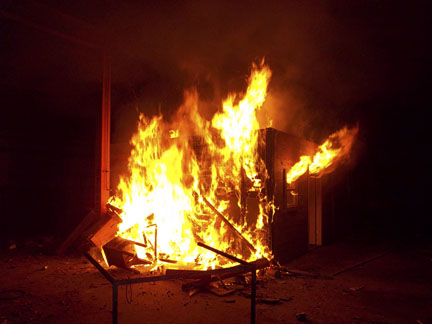 Lowndes County Sheriff's Deputies are searching for a suspected arsonist connected to a fire at the abandoned mill in the community of Braggs.

A local canine is helping Lowndes County Sheriff’s deputies track down a person suspected of arson.

Bubba the beagle has been a resident of Lowndes County for nearly two years.

As any other dog raised in a country setting, he enjoys finding new ways to entertain himself.

However, Bubba’s family, the Callaway’s, were surprised when Bubba dragged what looked to be a run-over digital camera into their front yard.

“We weren’t sure whose it was,” said Braggs resident Fay Callaway. “We were surprised to find the memory card was still in tact.”

The family put the memory disk into their computer to help locate the camera’s owner only to find what looked to be pictures and videos of a person setting fire to the abandoned saw mill in the Braggs community, said Fay.

Head of the household, Matthew Callaway, said he recalled seeing someone walking down the dirt road behind his house the night of Jan. 2; the evening of the mill fire.

“I could see them holding some kind of light,” Matthew said. “I yelled at them, asking them to identify themselves, but they never responded.”

Callaway said this may have been about the time the person misplaced the camera containing the evidence.

The Sheriff’s Department is working with the State Fire Marshall, Chuck Gorey, and the Alabama Bureau of Investigation to locate the suspected arsonist, said Sgt. Tom Birtley.

“The pictures alone point to arson,” Birtley said. “We will take the evidence to the ABI’s lab to lift any fingerprints from the camera.”