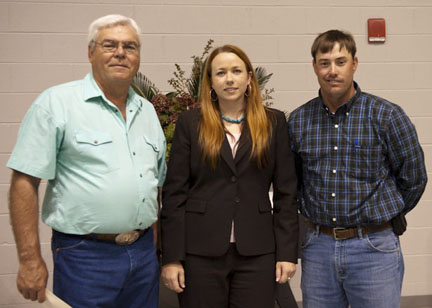 The Lowndes County Cattleman’s Association (LCCA) recently selected its officers for the 2011 year — officers who are continuing the organization’s work to preserve a part of American culture.

The LCCA recently elected George Hammonds to the position of President, Tina M. Coker as Vice President and Tyler Ellis for Treasurer.

Lowndes County’s cattle owners saw an increase in the amount of cattle thefts over the past five years and rallied to alter theft laws, strengthening cattle-rustling laws.

“We as farmers nationwide are making sure landowners and cattlemen can join together for Grass Roots lobbying,” said Coker.

Grass Roots lobbying is aimed toward protecting the beef industry from competition by organizations driving other industries, vegetarian lifestyles, harmful legislation and other threats.

The LCCA is an extension of the Alabama Cattleman’s Association (ACA), a non-profit organization aimed toward promoting beef consumption and protecting and boosting the cattle production business climate in Alabama.

“The cattle industry has to deal with the marketability of products,” Coker said. “We use a lot of state check-off dollars to put into programs to do market studies for novel ways to prepare beef for the modern family and product research to develop lean, healthy beef.”

Coker said the Cattleman’s Association is also facing legislation in agricultural states by the Humane Society of the United States (HSUS) and People for the Ethical Treatment of Animals (PETA) “that would eventually eradicate the American farmer.”

“A law recently passed in California substantially affected the poultry-farming community because of Free-Range Laws,” Coker said. “We are for allowing the American farm-life to go forward and making sure animal cruelty legislation doesn’t outlaw the American farmer.”

Legislation may eventually drive away landowners’ interest in allowing visitors to hunt, fish, pick produce or ride horses if the landowner can be sued as a result of an injury, such as a broken leg.

The LCCA holds its annual membership meeting every fall to discuss the various issues facing farmers, landowners and cattlemen.

However, the group also discusses assorted yearly events, trade shows and activities offered to the public.

Coming to Montgomery in February, the ACA will host its annual state convention, which will feature a trade show and cattle college events with farmers where cattle owners can learn about breeding, proper cattle feeding for correct weight gain and other important skills.

The ACA will follow the event with a rodeo in March.

Anyone interested in more information about the ACA or in joining the organization can visit www.bamabeef.org or contact George Hammonds, Tina Coker or Tyler Ellis at RafterJRanch@msn.com or tcoker@ago.state.al.us.