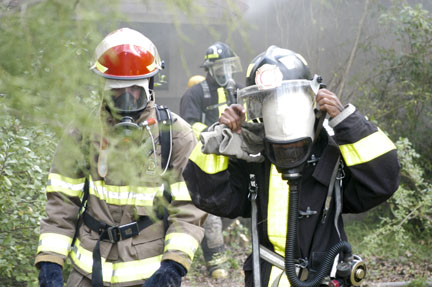 Volunteer firefighters exit a burning house during a scheduled training exercise on Cedar Street in Hayneville on Saturday.

Local volunteer firefighters recently took part in a training exercise to experience what it is like to run into a burning building.

Members of the Hayneville, Mosses and Braggs Volunteer Fire Departments (VFD) held a controlled burn at a house on Cedar Street in Hayneville on Saturday.

Volunteers were briefed about procedures and warnings to look for in a structure fire prior to setting the blaze.

“A fire doubles in size every seven minutes,” said Hayneville Assistant Fire Chief Scott Holmes. “It is important to check above ceilings and behind door trim for any smoke or heat.”

Firefighters grouped into three teams of three to enter the building, locate, observe and control the blaze.

After each team made its way through the home, volunteers manned three fire hoses around the structure and began dousing the surrounding area to keep the flames from spreading to the woods.

The “successful training exercise” lasted nearly five hours and ended with the home and an adjacent shed in ashes.

Fire Chiefs and their members routinely engage in joint training exercises to learn to work together as a team when emergency situations present themselves.