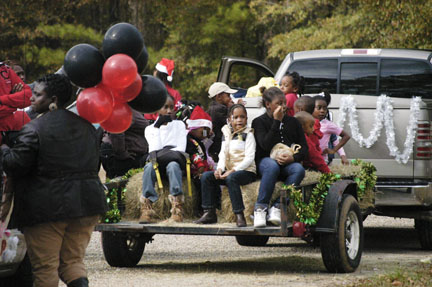 Hundreds turned out Saturday to enjoy music, marching and fun during one community’s largest parades in five years.

The town of Hayneville was host to a slue of motorcycles, floats, fire trucks and more during its annual Christmas parade Saturday.

The parade progressed from the old Russell Elementary School to the Hayneville town square, featuring music from the Calhoun and Central High School bands.

Three floats were chosen from those that participated and each were awarded plaques in varying categories by the town.

Of the participants selected, Little Union Christian Church’s entry was awarded “most Christmas spirit”, the STEP Program’s float received recognition in the “most creative” category and the Friendship Baptist Church was acknowledged for having the “most creative” entry, said Annie Robinson of the town of Hayneville.

At the conclusion of the parade, the town lit its nearly 10-foot tall Christmas tree provided by the city and adorned with nearly 600 lights in the town square, said Hayneville Mayor Helenor Bell.

“It was wonderful to see all the people turn out to celebrate with us during our Christmas parade,” said Hayneville Mayor Helenor Bell. “This would not have been possible without the help and participation of so many people.”

House fire sends one to hospital