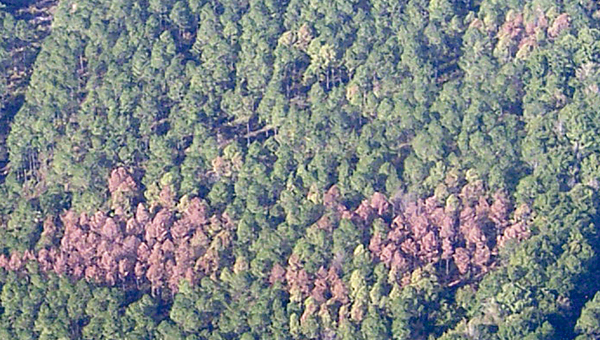 The Alabama Forestry Commission is working to alert landowners in Dallas, Lowndes and Wilcox counties to be on the lookout for increasing activity of pine bark beetles. The Ips beetle has reached epidemic population levels in southern Dallas, western Lowndes and much of Wilcox County.

These beetles are most problematic in pine plantations, and have killed up to 20 percent of pines in some stands this fall. The beetle populations are highest in areas hit hardest by the drought from this past summer.

In Dallas County these areas include Pleasant Hill, Carlowville, Minter, Tilden, Sardis and Orrville. The beetles are also active in areas around Marion Junction and Safford. The Alabama Forestry Commission has also found the southern pine beetle in ground checks, but the Ips bark beetle is currently causing most of the damage.

The needles of pines attacked by Ips bark beetles will turn red almost overnight as opposed to a gradual color change from attack by the southern pine beetle. Initially, one to three trees in a small group will be attacked. This pattern can be repeated in several spots over an acre, often resulting in a polka dot appearance from the air.

These small spots may grow to include 10-20 trees while new spots are also emerging. If 15-20 percent of the trees in a stand get red tops from the Ips bark beetle, it is time to take action. Landowners need to do a commercial thin if possible, thinning these infested trees.

It is usually necessary to thin some green pine timber during this process to justify getting a logger to come to the property. It is dangerous for a landowner to attempt to fell beetle killed pines with a chainsaw. These trees could have a brittle top.

According to a Forestry Commission release, salvage cutting is the best control method for the Ips bark beetle.

More information on the Ips bark beetle can be found at www.forestry.alabama.gov. Click on the “Insects, Disease, & Invasive Species” tab to see an information sheet on Ips bark beetles. Also the “Fast Links” block has a database on service providers, with listings of consulting foresters and timber buyers serving each county in Alabama. Landowners can call the Dallas County AFC office at 875-7131 for more information.

Bill and Thomas Bates of Bates Turkey Farm in Logan and Bates House of Turkey in Greenville pose for a... read more