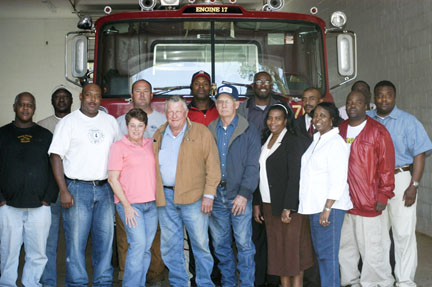 Lowndes County’s volunteer firefighters are now better educated about what it takes to lower their Insurance Services Offices (ISO) rating.

Over the weekend, a number of volunteers from various volunteer fire departments (VFD) took an eight-hour ISO training course.

The class was taught at the Hayneville VFD by Derrick Swanson, the Regional Coordinator for the Alabama Fire College.

“We decide, based on our equipment, training and records, what people pay for homeowner’s insurance,” said Swanson. “The big picture is we can save a lot of money.”

Members learned percentages of the ISO review that contribute to scoring and how to confront them first hand.

Swanson discussed the point values of every piece of equipment reviewed by the ISO and offered checklists to volunteers anticipating future ISO reviews.

ISO is the leading supplier of statistical underwriting and actuarial information for the property and casualty insurance industry and surveys fire suppression capability only, Swanson said.

ISO will visit communities for malfeasance, by request or at the time for survey, however communities have the final say as to if ISO can come in for review.

Ratings are broken up among three categories and given a certain percentage value.

Communication accounts for 10-percent, water supply for 40-percent and 50-percent of the rating comes from the fire department itself.

Members used checklists to review the items on a fire truck to understand how each piece of equipment contributes to the department rating and learned about retrogression and divergence.

Retrogression is when a community is surveyed and does not maintain its existing rating or community demands.

Divergence means a department and its members have the necessary equipment, but are not educated how to use it.

Swanson noted retrogression happens often when there is a change in a department’s leadership saying, “it’s almost like they have to begin all over again.”

“It is important for all the departments to work together to be able to better serve our community,” said Hayneville VFD Chief Jesse McCall.