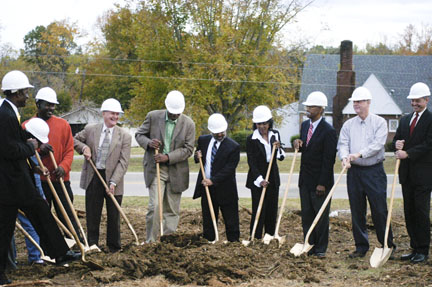 Members of the Lowndes County Commission, the Hayneville town council, members of Health Services Incorporated and Lowndes County residents were in attendance to witness the ceremony.

County Commission Chairman Charlie King, Jr said he is anxious to see the completion of the new building as it will mean additional jobs for the citizens of Lowndes County.

The new facility will be located adjacent to the Lowndes County Health Department along Highway 21 in Hayneville and will replace the older Family Health Center.

The new health center will be a $926,000 federally funded stimulus project, feature a campus-like environment and work hand-in-hand the Lowndes County Health Department.

Hayneville’s older family health facility is over 30 years old and has become obsolete, according to Hayneville Mayor Pro-tem David Daniels.

Daniels has stated the older Family Health Center and old jail may be used to create a civil rights museum, provided the older facility becomes available.

A majority of the building project is estimated to be completed by May 25, 2011 and is expected to open its doors toward the beginning of June 2011.

“This new Family Health Center will be a positive addition to the town of Hayneville,” said Hayneville Mayor Helenor Bell.