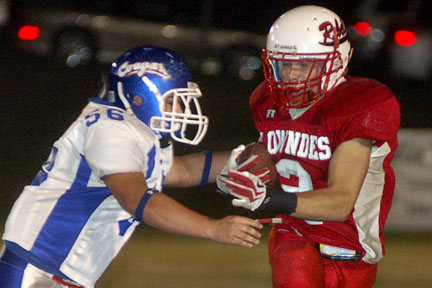 The Crenshaw County Academy Cougars jumped out to an early lead against Lowndes Academy and never let go on the way to a 27-14 victory.

The Cougars led 14-0 late in the first quarter following touchdown runs from Michael D’Arville and Will Moses, but the Lowndes defense stood tall at their own nine-yard line with 10 minutes left before halftime.

Facing fourth down and inches at their own 18, the Rebels drew CCA offside and on the next play, Anderson Casey took a swing pass to the right side 77 yards for a touchdown to make it 14-7.

The Cougars added another touchdown late in the first half to make the score 21-7 at halftime.

After a 26-yard run by Casey to the Crenshaw 30-yard line to start the fourth quarter, quarterback Hank McIntosh connected with Garrett Headley for 29-yard screen pass that again made it a one-score game with 11:25 to play in the game.

The Cougars were able to milk the clock and put one more touchdown on the board with 3:56 to go to seal the game.

“They came out and hit us in the mouth,” he said. “We played better in the second half, but it’s tough to come back from a deficit.  They just ran it down our throats.”

“We adjusted the defense, but they had the momentum for most of the first half, and we didn’t play with enough intensity,” Sullivan added.

The loss is only Lowndes Academy’s second of the season and their first in region play.

The Rebels are now the second-seeded team in the region and will open up the playoffs at home in two weeks.