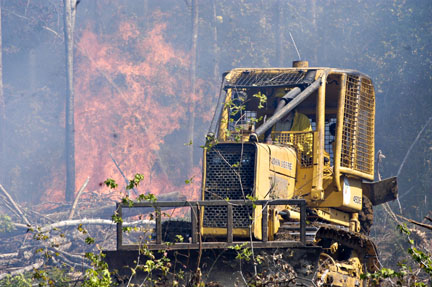 The Alabama Forestry Commission was called Friday to help isolate and extinguish a garbage fire that quickly spread to the surrounding woods in Minter.

A mid-afternoon fire spread to the surrounding woods along Highway 21 in the Minter area Friday.

The blaze started around 12 p.m. after a resident burning trash left the area unattended, thinking the fire was extinguished, according to witnesses Kishia Moorer and Jackie Sanders.

“We thought the fire had been put out. Next thing we know, it had spread further out,” said Moorer. “We grabbed hoses and buckets to try and put out the fire.”

Collirene and Mosses’ Volunteer Fire Departments were called to help control the fire.

The Forestry Commission was later called in to bring bulldozers after the flames quickly spread to the surrounding woods.

Workers used the heavy equipment to clear parts of the wooded area to isolate the further spread of the blaze.
Fire Department officials reminded all residents that a state-wide ban on all burning is in effect.