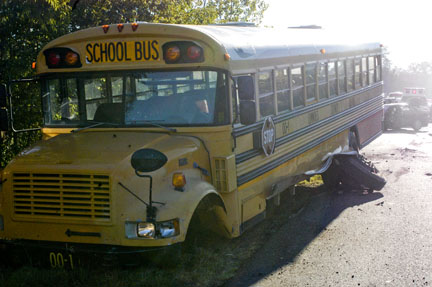 An early morning wreck involving a school bus and car resulted in two adults and two children being rushed to Baptist South with minor injuries.

The wreck happened along Lowndes County Road 2 near the Hayneville and Mosses Communities.

Lowndes County Sheriff’s Deputies said the school bus was on its way to the Mosses community to drop off an estimated 25 children at the local school when it collided with a car traveling the opposite direction.

“The cause of the accident is still being investigated,” Lowndes County Sheriff’s Deputy Al Cox said. “It is believed the sun may have been a contributing factor.”

The bus driver, two children and the driver of the car, complained of backaches and stomach pains. They were transported to Baptist South with minor injuries.

First responders to the scene had to use extraction equipment to remove the driver from the car.

“None of the injuries were life-threatening,” said EMA Director Walter Hill. “The situation could have been a lot worse if the bus driver had not kept control of the vehicle from going into the ravine as she did.”

Hill also commented on the amount of first responders and emergency workers whom responded to the wreck.

“Given the nature of the situation, it was a godsend to have as many emergency and ambulance workers respond to the accident,” Hill said. “We even had some of the first responders arrive in their own personal vehicles.”

Update: According to a release from the Department of Transportation, the vehicle was a 2006 Ford Taurus driven by Alisa Robinson, 20, which collided with a 2000 International 3800 school bus driven by Charlise Joshua, 52.

A total of 25 occupants were on the bus, including the driver. There was one passenger in the car who was not injured. State Troopers continue to investigate.