‘No burn’ ordinance in effect across county 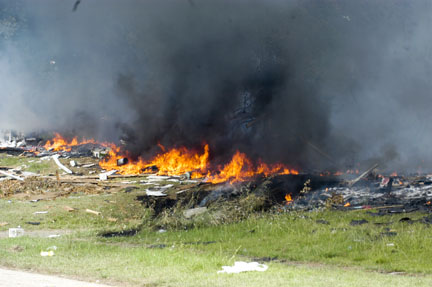 Grass fires are a particular danger because of the lack of rainfall across the state in recent months.

An increase in the amount of grass fires has led local Volunteer Fire Departments to cease issuing burn permits to Lowndes County citizens.

A no burn ordinance was issued across the entire state of Alabama due to the dry weather over the past several weeks.

EMA Director Walter Hill indicated that many of the fires are caused by people burning trash and tires that quickly get out of hand. Those fires are continuing to threaten homes and cattle.

“People are burning, it is dry and the wind is unpredictable,” said Mosses Fire Chief Eric Hall.

“We have seen an increase of grass fires all over the county and it’s keeping our first responders busy,” said Hill. “We are asking residents to abide by the no burn ordinance.”

As long as the no burn ordinance is in effect, the fire departments cannot override that by issuing a burn permit, according to Hall.

“The main problem we have in our neighborhoods are people burning tires,” said Hall. “When burned, tires are very poisonous, unfriendly to the environment and can cause a slue of health issues.”

Hall stated if any of the Lowndes County fire departments respond to a call where tires are found, they plan on prosecuting to the fullest extent of the law.

Hill added since there is no longer a Forestry Commission located in Lowndes County, it can take anywhere from 45-minutes to one hour for workers to respond with bulldozers and other equipment to help extinguish any fires.

Board votes to keep DTF in county