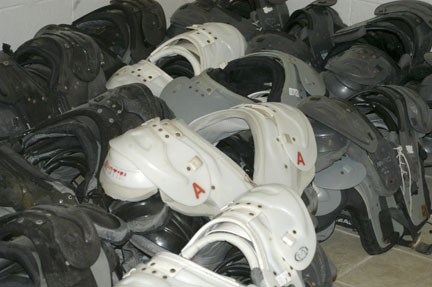 Donations, contributions and offers from local businesses, churches, schools and people have allowed Central-Hayneville High School to pick up where they left off after a recent fire claimed their field house.

In spite of the recent loss of Central-Hayneville High School’s football equipment in a fire, the school is seeing a quick recovery of the items lost.

The Central High School field house caught fire Sept. 28 leaving the football team without a weight room, football gear and the school without a press box and concession stand.

However, numerous businesses, individuals, schools and churches have either donated money, equipment or offered to help support the school’s replacement of everything lost in the fire.

“There are tons of schools, people and businesses that have made offers or have given things to help us replace the lost equipment,” said Central High School Coach Tito Baker. “There are too many to name.”

Grant said the quick response would not have been possible without the help of the AHSAA in getting word of the school’s to other local schools in the surrounding area.

“The offers have been very generous and we are very appreciative of the donations we have received,” said Central-Hayneville High School Principal Peggy Grant. “We will be making sure the donations used will be used to replace the equipment that was lost.”

The monetary donations made to Central will be primarily focused on rebuilding the football team’s weight room, according to Grant.

A press release by Fire Marshall Chuck Gory has determined the fire to be a result of electrical problems in the field house.