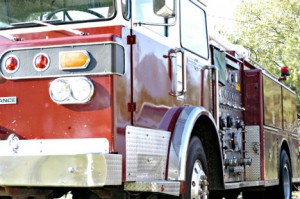 The Mosses Volunteer Fire Department was recently donated a 1978 American LaFrance fire truck in addition to some other equipment and turnout gear.

Some of the Lowndes County Volunteer Fire Departments can breathe a little easier since the recent donation of some much needed equipment.

“I met Mark Mitchell through some fire associates and he quickly made himself available for our needs for this county and these departments,” said Hall.

The equipment is being distributed to the various departments throughout the county as needed by each of the VFDs, according to Hall.

The equipment will allow Lowndes County first responders to enhance their safety and have a greater chance of effectively doing their job.

“This will better serve our citizens, because we will be able to protect their safety and their lives,” Hall said.

Mosses’ VFD also recently received a $3,000 grant from the Black Belt Community Foundation that has allowed them to purchase additional personal protection equipment, such as helmets, gloves and turnout gear.

“It was a much needed grant, because some of our guys’ equipment was obsolete,” added Hall.

In addition, the Lowndes County VFDs and other public safety responders will be holding their third annual Christmas Banquet fundraiser Dec. 11.

The fundraiser allows the local departments to thank its volunteers and share fire safety information with the public.

“This is a way for us to show our appreciation to the members of our fire departments by awarding them certificates and plaques,” said Hall.

The event is scheduled for Dec. 11 at the Mosses Town Hall. Tickets for the event require a $7 donation.