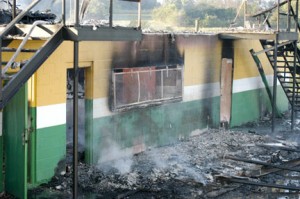 Assistant Superintendent Jason Burroughs said he called Mayor of Mosses Walter Hill around 6:15 a.m. Sept. 28 when he learned of the fire.

“The fire departments had a quick response time,” said Burroughs. “But by that time the building was already engulfed.”

The field house held the football team’s weight room, football pads and gear and was used as the school’s press box during home games.

“I don’t know if we’ll be able to play,” said Lions football player Rod McReynolds. “All of our stuff was in there.”

Principal Peggy Grant said she would be working to contact the football teams who are scheduled to play over the next few weeks at Central.

No final decision regarding the remaining games has been discussed between Superintendent Daniel Boyd and Grant and the school‘s homecoming celebration is nearly three weeks away.

“We operate with so little and the children never complain,” said Grant. “Now what little they had is gone.”

Fire Marshall Chuck Gory will be investigating the cause of the fire so the school may file a claim on their insurance.

“We tried to contain it and leave as much as possible for the investigation,” Mosses Fire Chief Eric Hall said.

This is the second time in two and a half years the building has burned, according to Hill.