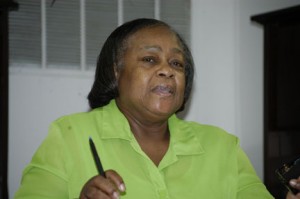 Some new methods are being discussed to assist in the education and prevention of HIV and STDs in Lowndes County and the state of Alabama.

Empirical data showing the number of HIV and AIDS cases reported in 2009 and the first six months of 2010 showed a significant decrease of HIV and AIDS incidents reported from Jan.-July of 2010 compared to Jan.-Dec. of 2009.

HIV is and is not an STD for a number of reasons. HIV can be transmitted sexually and through other various means, such as sharing needles with someone who is HIV positive.

The possibility of a Web site was discussed to provide continuously updated information for anyone with interests or concerns.

Bradley noted public health area 7 had been successful in the prevention of the cases of syphilis.

There are still cases of congenital syphilis being reported from parents who do not seek prenatal care prior to the delivery of a child.

Newborns who tests positive for congenital syphilis have the test sent to the Center for Disease Control (CDC) for further research, according to Bradley.

“There should not be any congenital syphilis in 2010,” added Bradley.

Mosses Mayor Walter Hill and White Hall Mayor Elizabeth Davis applauded the efforts of the numerous organizations and their commitment to wipe out HIV, AIDS and other STDs.

“One of the things we can do to help with the problem is to educate people with workshops and conferences, like this one today,” said Davis. “Schools, churches, politicians — everyone has to get involved.”

The next Black Belt HIV Prevention Network will be held Oct. 15 at the Dallas County Health Department starting at 12 p.m. The event is open to the public to come, volunteer and discuss new and ongoing ideas.