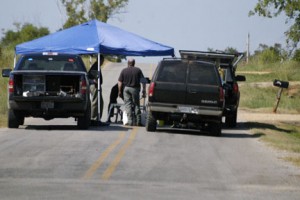 The Alabama Bureau of Investigation Bomb Squad sets up equipment to approach and investigate a package thought to be a bomb found in a mailbox in the small community of Collirene.

A suspicious package in a local Lowndes County community has been disarmed by the Alabama Bureau of Investigation’s Bomb Squad.

The Lowndes County Emergency Management Agency and the ABI Bomb Squad responded to a call that  a suspicious package, resembling a bomb, was found in a resident‘s mailbox in the Collirene community, according to EMA Director Walter Hill.

The package was isolated, contained and disarmed about one hour after the initial call was placed.

A radio and ammunition were found taped to the underside of the package, according to Lowndes County investigators. Emergency responders barricaded either side of Collirene Cutoff Road at County Roads 9 and 12.

Investigators are now examining the contents of the package for evidence.

More information as it becomes available through the Lowndes Signal.