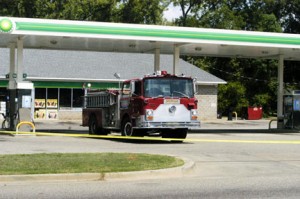 First responders and sheriff’s deputies cleared the parking lot of the BP gas station at the corner of Highway 97 and 21 in Hayneville after a phone call warning employees of a bomb in the building.

By EASON FRANKLIN
The Lowndes Signal
A local Lowndes County gas station can breathe a sigh of relief this afternoon having received a bomb threat earlier in the day.

A bomb threat was called in to a local Lowndes County gas station forcing customers and employees to evacuate.

The BP gas station at the intersection of Highways 21 and 97 in Hayneville received a telephone call just before 11 a.m. Sept 15 saying, “Clear the BP service station…there is a bomb,” according to EMA director Walter Hill.

“First responders and law enforcement are searching the premises for any trace of a bomb,” said Hill.
The Alabama Bureau of Investigation is on standby with bomb-sniffing dogs and tactical teams, according to Hill.

Hill added that “the Hayneville Police Department will be heading up the investigation with the ABI to trace the phone call to see where the call originated.”

Emergency workers and sheriff’s deputies gave the all clear call about two hours after the initial phone call.