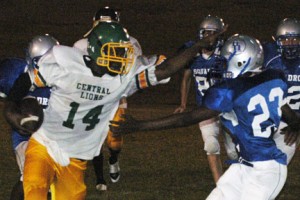 Central's Dominique Crenshaw delivers a stiff-arm against the Flying Squadron.

The Central-Hayneville Lions were dealt their first loss of the season Friday night at the hands of the Highland Home Flying Squadron.

Highland Home scored 47 unanswered points against the Lions before the end of the first half carrying them to a 47-0 victory by game‘s end.

Squadron wide-receiver Lewis Johnson scored the first touchdown of the game against the Lions within two minutes of the game’s start. Johnson

“We came out for a good week of practice getting the team solid,” said Highland Home Coach Tom Pinkston. “We were able to correct some errors during our game against Brantley.”

The Lions were plagued by 12 penalties and four sacks on the quarterback which cost them nearly 100 yards versus the Squadron’s four penalties through the course of the game.

“We’ve got a lot of things we need to work on,” said Central-Hayneville Coach Keith Scissum. “We will be working on fundamentals our next practice.”

Running-back John Dunn of Highland Home picked up 15 yards for a touchdown in the first-half bringing the Squadron’s score to 33-0.

“We were solid on blocks and getting to where we can execute on offense,” said Pinkston. “Defense got to the ball better tonight and showed a better effort.”

Dunn later scored a second touchdown on a punt return with three minutes left in the second quarter bringing the score to 47-0.

“With the young guys we got to see a lot of strength and weaknesses,” said Baker. “We’ve got to do a better job of getting it into the good players’ hands.”