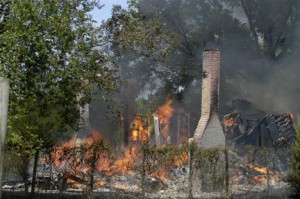 The fire occurred around 11:15 a.m. Aug. 5 at the home of April Seawright on Main St. in the small community of Mosses.

According to reports from EMA Director Walter Hill, the fire was thought to be caused by an electrical outlet shorting out.

The family had recently had their propane gas tank filled and a compromise to the gas line served as a greater threat to first responders, according to Hill.

“When we arrived, we learned the family had recently had their propane gas tank recently filled,” said Hill. “Firefighters were able to reach the shutoff valve before the tank was able to explode.”

Seawright was treated at the location after receiving cuts to her arm from busting out a window in an effort to help her children escape the blaze. The children were asleep at the time the fire started, according to Hill.

Mosses’ Assistant Fire Chief Eric Hall will make an assessment of the fire based on reports from the family and onlookers to determine if any suspicious activity led to the home catching fire.