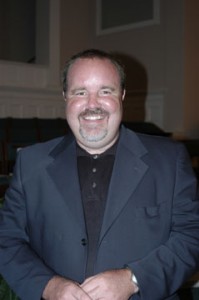 Pastor Eric Jackson of the New Bethel Baptist Church in Ft. Deposit poses for a photo after his celebration dinner honoring his term as pastor at the church.

A prominent Lowndes County citizen has moved and the influence they have left on the community is echoing across the county.

Eric Jackson, former pastor of the New Bethel Baptist Church in Ft. Deposit and Chief of the Ft. Deposit Fire Department, has moved to Titus to pursue his career as a pastor in a new town.

A community dinner honoring Jackson’s contributions to his church was held at the New Bethel Church in Ft. Deposit on July 28.

At least 100 friends and relatives joined in the ceremony to pay tribute to Jackson’s 10-year run as pastor of the New Bethel Church.

“The main thing I will miss about the church and the community is the people that make it up,” said Jackson.

Jackson also served with the Ft. Deposit Fire Department during his 10-year-stint in Lowndes County, first working as a firefighter, then being promoted to Fire Chief in January of 2008.

“The area in which we covered offered a lot of variety of emergency situations,” said Jackson. “The guys we were able to work with were wonderful, well-trained and offered a sense of camaraderie.”

Jackson left the Ft. Deposit community Aug. 1 to fill the position as pastor of the Titus church.

The New Bethel Church will be appointing a search committee over the next few weeks to seek out a pastor to replace Jackson.

Jackson offered some words of wisdom to his congregation as he steps down as pastor.

“As long as people keep Christ first, they can do anything,” said Jackson.