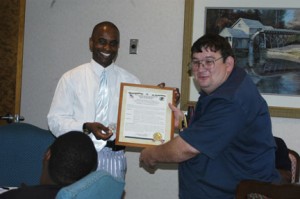 EMA Director Walter Hill presents Ransom Granthum with an award for his 20 years of service as a Lowndes County first responder before he steps down.

A host of Lowndes County’s first responders gathered this week to discuss new communicative techniques and how they will be now able to answer emergency calls in a more efficient and productive manner.

The Lowndes County Office of Homeland Security/Emergency Management Agency (EMA) held its third-quarterly First Responder’s Luncheon July 28 to discuss the course and a series of procedures to help with communication with the various departments.

The National Incident Management Service (NIMS) is a training course federally implemented after Sept. 11, 2001 to ensure that various fire, police and emergency departments communicate and collaborate with each other to allow for quicker response times and less confusion, according to EMA Director Walter Hill.

“We want a continuous collaboration between all Lowndes County first responders and law enforcement,” said Hill. “We host luncheons on a quarterly basis which helps us work together to bridge gaps in response time.”

Equipment testing periods, the need of cameras to video incidents, marking working and non-working fire hydrants, possible needs for vehicle GPS and other helpful training courses were some of topics discussed.

“The talks helped me to get a better understanding of Volunteer Firefighter procedures for responses to medical calls,” said Means.

During discussions, Derrick Swanson of the Alabama Firefighters College commended the Lowndes County first responders and their table-top discussions saying that other counties in Alabama are modeling themselves after Lowndes County in terms of thorough communication.

Hill will be holding NIMS training courses for first responders within the next few weeks.