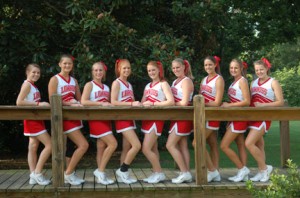 Some Lowndes County cheerleaders are being offered the opportunity to participate in parades in the state and out of the nation.

Lowndes Academy Senior Jamie Wheeler and Freshman Anna Leigh Page made UCA All American and have the opportunities to attend parades in Orlando, Fl and London, England.

“The girls did a great job and worked hard through all their practices,” said JV sponsor Kristen Harrell. “Their work effort is fantastic.”

The girls attend the camp each year to learn new dance moves, cheers and stunts. This year a primary focus of the camp was leadership, according to Harrell.

Sydney Bell, an eighth grader, won Pen-it-Forward which is awarded to the cheerleader who demonstrates high levels of leadership throughout the week-long camp.

Harrell has sponsored the cheerleaders for the past seven years and said this years “was the best” since she began sponsoring the girls.

“I’m glad I got the opportunity to be around them,” said Harrell. “They are a great group of girls and I hope to continue sponsoring them in the future.”