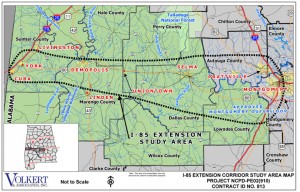 A map has been drawn up of the areas that may possibly be involved in the expansion.

A series of public meetings will be held this week regarding the proposed extension of Interstate 85 westward from Montgomery.

All of the meetings are open to the public. Volkert Engineering, the Alabama Department of Transportation and the Federal Highway Administration will be present.

“The purpose is to highlight the draft environmental impact study conducted for the potential extension of I-85 to connect with I-59 and I-20 at the Mississippi state line,” said Ed Martin, a spokesman for the team. “The results are eye-popping.”

There is also a Web site for people to gain information about the project, www.I85extension.com.

The University of Alabama Center for Business and Economic Research conducted a socio-economic analyses for the proposed project, which indicate all eight counties within the project study area are projected to experience an increase in population with the construction of the proposed project, except for Sumter County, according to an overview of the impact study.

“Employment forecasts indicate that the counties within the project study area will see an increase in jobs,” the study states. “Economic output forecasts project that each county within the project study area will increase its output. It is anticipated that growth in many of the region’s counties will be in labor intensive industries, such as trade and services.”

However, individuals should not expect to see construction soon. The project is in the planning phases, with estimated costs ranging from about $2.1 to $2.5 billion. The preferred route would cost about $2.4 billion.

Leesha Faulkner and David Snow contributed to this report.