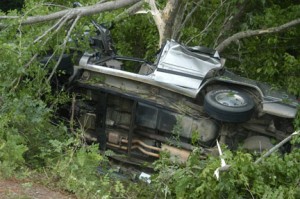 The Chevy Tahoe that McPherson was driving came to rest in a ditch.

A Ft. Deposit resident was rushed to the hospital early in the morning July 6 after their vehicle overturned on Highway 37 near Ft. Deposit.
Quintanna McPherson, 18, is believed to have been driving to work on Highway 37 when she lost control of her Chevy Tahoe and veered into a steep ditch, according to Lowndes County Sheriff‘s Deputy Al Cox.
“Alabama State Troopers will be investigating the cause of the accident,” said Cox.
McPherson was air-lifted to Baptist South Hospital in Montgomery and is in surgical intensive care.