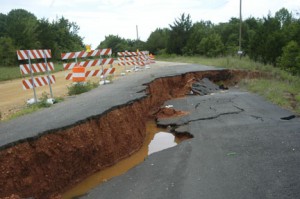 A section of road along Highway 37 between Letohatchee and Ft. Deposit washed away during heavy rains between Spring and Fall of 2009.

The Lowndes County Commission has approved the contract to begin work on the section of Highway 37 that has washed away.

The contract has been awarded to Goodwyn, Mills & Kawood for $62,033 to begin civil engineering surveys of the Highway between Letohatchee and Ft. Deposit.

County Commissioners entered into an 80/20 split with the Alabama Department of Transportation, $12,406.60 of which is to be paid by Lowndes County.

The section of Highway 37 began washing away during the Spring of 2009 and progressed to its current condition sometime in the Fall of 2009.

The lengthy process of repairing the road is necessary to make sure this type of problem does not occur in the future, according to County Engineer David Butts.

“The water table under the road is causing the terrain to slide,” said Butts.

The area where the problem occurred stretches about 200 ft. long and has led County Commissioners to lower the speed limit in the area from 45 mph to 15 mph for the public’s safety.

The civil engineer will survey the area in and around the problem and create a 3D model of the washed out road to allow geographical technicians to better understand how to correct the problem.

“The civil engineer will analyze the cross-section down at the tow of the problem,” said Butts. “They will get elevation shots, angles and distances and input that into a computer model.”

Other items on the County Commission’s agenda June 28:

– Reginald Sharpe appeared before the County Commission asking for gravel to be placed on Mt. Moriah Road.

– County Engineer David Butts gave his report on the status and location of equipment.

A preconstruction conference for County Roads 26 and 6 will be held June 29 at the County Commission office, according to Butts.

– A bulldozer that was burned June 28 is being looked at to determine if the machine is salvageable. County workers are waiting on an official report to be filed by the Lowndes County Sheriff’s Department.

– A motion was granted and passed unanimously on a levy for lowering taxes for 2010.

– The County Commission approved unanimously to grant a DUNS number to the Industrial Development (ID) Board.

A DUNS number is an identification number to allow the federal government to track the distribution of funds.

With the DUNS number, the ID Board will be able to apply for grants without having to elongate the process by asking approval from the County Commission.

New businesses are interested in building in the Industrial Park, but require the water and sewage infrastructure to be completed prior to construction. The Economic Development Administration is requiring confirmation from the businesses before they allow funding through grants.

Commissioners granted the DUNS number with the exception that all associated costs would fall under the responsibility of the ID Board and not the County Commission.

County Administrator Jacquelyn Thomas said the check was in the mail, but is unsure if it will be delivered to the Commission or to the USDA.

– Commissioners voted to continue the contract with Purdie & Sons garbage service. All other bids were rejected. Dickson Farrior and Joey Barganier abstained from the vote without the attorney present.

– A letter from Dorothy Hughey was read declined her appointment to the Economic Development Board.

King said the Commission would work to have a replacement by the July 12 meeting.