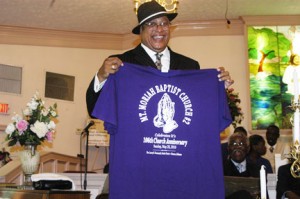 The Rev. Larry Townsend of the Mt. Moriah #2 Baptist Church in Mosses holds up the t-shirt made for the church’s 106th celebration during the final minutes of the event.

The Mt. Moriah #2 Baptist Church in Mosses and its friends celebrated the church’s 106th anniversary with songs of praise and worship, guest speakers and healthy helpings of food May 23.

Themed “Look and See Where the Lord Has Brought Us From”, the event focused on the teachings of Jesus Christ through song and sermon, featuring the Bethel Missionary Baptist Church choir and Pastor Calvin McTier from Montgomery.

McTier made comparisons between the church’s admission of members and a hospitals admission of patients and encouraged church members to rush to people who need help, similar to ambulances rushing to the scenes of life-threatening emergencies.

During the ceremony, members of the church lit candles and honored the churches milestones in history since its start in 1903 with a memorial tribute to those who brought the church to where it is today.

Pauline Johnson began the tribute with a song telling about Ben Moss starting the church, how it was rebuilt after being plagued by storms and its role in the civil rights movement.

Next was an oral presentation of the church’s present status and achievements under Larry Townsend given by Loretta Lattimer.

Lattimer spoke about Townsend founding the Ark of Love Ministries and their efforts to improve the economic needs of the community and people in Mosses and Lowndes County.

The church collected nearly $3,500 in donations between the morning and afternoon services and was host to over 200 members and guests throughout the day, including Representative James Thomas.