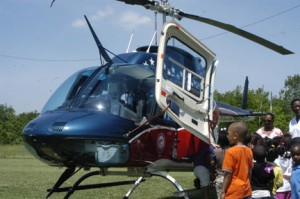 A helicopter touched down on the football field of Central High School on May 13, and the landing was arranged between the various first response agencies throughout Lowndes County, in the first of what will become an annual exhibition.

The Mosses Volunteer Fire Department coordinated the event to educate and entertain children enrolled in the Board of Education Head Start program.

“We want to give children the opportunity to ask questions and hear, first-hand, from the people on the front lines of safety,” said EMA Director Walter Hill.

Collirene, Mosses, Ft. Deposit, Sandy Ridge and Hayneville Fire Departments, paramedics, the Air Evac Team and the Emergency Management Agency (EMA) gathered children around to show them the different pieces of equipment used in emergencies and familiarize them about how they work and their use.

Trent Kemp, pilot of the air response helicopter, Carolyn Barks and John Fryer, who are flight nurses, started the event with information about the helicopter‘s role.

Fryer talked about the 93 emergency helicopters that are used across 14 states in the nation and the four used in the state of Alabama.

According to Fryer, each helicopter has its own maintenance crew who work around the clock, 24/7, to keep it functioning.

Firefighters then demonstrated the jaws of life, oxygen tanks and inflatable air bags used to lift large objects, among other things, and let some children play with the fire hose.

Coloring books, wrist bands, balls and plastic firefighter hats were handed out to the children before they took their seats in the bleachers to watch the helicopter take off.

“This is a positive experience for the children to become more comfortable around emergency workers,” said Head Start Director Samita Jeter. “It’s great to have the resources to be able to do exhibitions like this.”