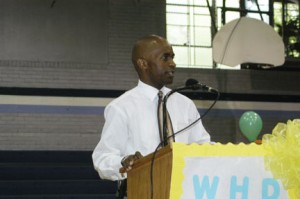 Walter Hill gives a speech on the importance of believing in yourself at Hayneville Middle School’s Honors Day ceremony.

Sixth and seventh-grade students from Hayneville Middle were honored May 14 for their achievements over the school year.

Awards were presented to the students who have excelled academically, athletically and musically the past two semesters.

“This is the school’s opportunity to award students for their efforts over the year,” said Principal Bernard Mitchell. “We can be quick to punish, but 90 to 95-percent of our students do great.”

A-B Honor Roll students assisted the faculty during the ceremony with speeches, the pledge of allegiance, introductions and music.

Music was performed by the HMS choir, which was backed by a guitar, drums and keyboard.

Dhestinee Ray, who will be going to Washington D.C. to participate in the National History Day competition, introduced guest speaker Walter Hill, EMA Director and Mayor of Mosses.

Hill gave a motivational speech to the children about believing in yourself and gave examples of what a person can achieve on their own.

“By putting hope in your brains and not dope in your veins, you can achieve anything,” said Hill.

Hill ended his speech with a story about keeping a good attitude and thinking about the consequences of actions.

“Before you react to a situation…think about the consequences of your attitude,” added Hill. “You may find you‘ll regret your actions.”

As Hill concluded his speech, it was time to present awards to the honor students.

One student received more awards than any other student. Ke’shai Kingka was given awards for all A’s and B’s, Physical Fitness/Physical Education, Career Clusters and choir.

The other honorees were presents with plaques, certificates and medals for their improvements and achievements.

Mitchell ended the ceremony emphasizing his “belief that all Hayneville Middle students can achieve what they set their minds to.”

Student of the Month (May):