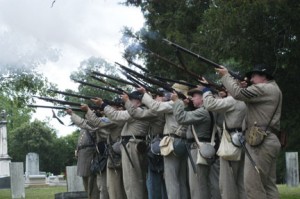 Re-enactors fire their muskets at a memorial service held during Lowndesboro’s Heritage celebration on May 1.

Forecasts of rain did not stop the citizens of Lowndesboro from celebrating Heritage Day on May 1.

Visitors, workers and re-enactors made their way from throughout Lowndes County and further to partake in the all-day event.

People were transported to and from each location for the scheduled events by a school bus borrowed from Lowndes Academy.

Those who attended got to hear presentations given by residents of Lowndesboro portraying distinguished historical figures.

Everyone ventured to the President’s Home to learn about the Lowndesboro Female institute, which was completed in August of 1850.

At Pecan Place, Joe Ward played the role of Dr. Hardy Vickers Wooten who, with the advice of a classmate, moved to Lowndesboro from Georgia at the age of 24 to set up his medical practice.

Later, he founded the Lowndesboro Female Institute and served as the institute’s president, represented the county at the Whig State Convention and represented Alabama at the national Medical Convention in New York City.

Born in Hancock Georgia, Lewis’ parents moved to Alabama in 1818, leaving their son in Georgia to pursue his education.

The politician moved to Alabama after graduating from Columbia College in South Carolina. He stood six-feet tall and weighed nearly 500 pounds.

Lewis served as a United States Senator from Alabama, was chairman of the Finance Committee of the Senate and held a political career for 25 years at the time he died.

As the afternoon approached, everyone loaded onto the bus to head toward the Oakview Cemetery for a memorial service held by the 33rd Alabama Volunteer Infantry.

Facts about the soldiers who were buried in the cemetery and information about Lowndesboro during that time were given before to a salute by the re-enactors.

Everyone waited patiently as the men loaded their muskets to prepare to shoot, only to jump when they fired.

When the memorial service concluded, Mayor Rick Pate, the re-enactors and some other visitors loaded onto the bus to prepare for the Star Spangled Stampede.

The young ladies performed in a coordinated unison holding American flags in one hand and their horse’s reins in the other to conclude the all-day celebration.