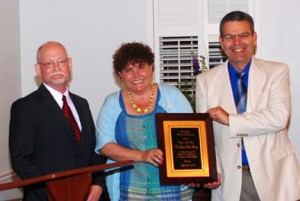 (L-R) Eric H. Ellis, Kathy Standridge and Dan Therrien pose for a photo after being awarded Citizen of the Year for efforts with the Ft. Deposit public library.

The Ft. Deposit public library will soon be looking for a new person to run the facility’s day-to-day operations.

Next week, Dan Therrien, President of the Ft. Deposit Library Board, in preparation for his move out of state, will begin training Bruce McCarty to run the library.

Therrien and library director Kathy Standridge were honored by the Ft. Deposit Chamber of Commerce as Citizens of the Year on April 24 at the Fellowship Hall Baptist Church.

The Chamber award was given in recognition for Therrien and Standridge’s exhaustive efforts to keep the public library a product of community participation and involvement.

The annual event dates back to the 1950’s when the original chamber meetings were held at a restaurant in Ft. Deposit which no longer exists.

Then known as the Ladies Night Banquet, members would name a man of the year for his achievements within the community. Soon thereafter, the chamber would name a lady of the year to coincide.

The chamber members slowly graduated and began naming a citizen of the year, but have consistently named groups of individuals, rather than one person, for the past three years.

“The dream of having a library dates back to the 1970s,” said Chamber of Commerce President Eric Ellis. “This town has made consistent efforts to get a library.”

The library has received numerous grants as the result of Therrien’s efforts, receiving about $8,500 in grants in one month.

Grants from Cornerstone Community Outreach, the Black Belt Community Foundation, BJ Auto Sales and Amedisys are only a few of the organizations that have donated money for the benefit of the Ft. Deposit public library.

The Ft. Deposit public library opened about one year ago after three years of renovation and preparation.

Charles Haigler donated the land where the Ft. Deposit Motor Company once resided to make way for the new public library.
Since then, over $100,000 in grant money has been used to refurbish and furnish the building in addition to the 10,000 books which were donated by local residents and other libraries.
The library is recruiting volunteers who can manage three hours-a-day, one day per week to come in or call Therrien at 334-227-4600 or Cathy Standridge at 334-233-8785.