Renfroe to be named track MVP 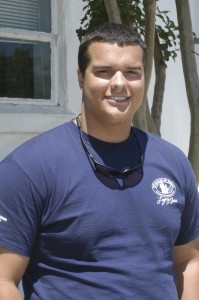 Russ Renfroe, son of Russell and Cheri Renfroe of Montgomery, placed first in the shot-put competition at the AISA State Championship Track Meet

A Lowndes Academy student will be receiving the school’s MVP award for track after a recent track meet, according to Coach Cliff Cobb.

Russ Renfroe, son of Russell and Cheri Renfroe of Montgomery, placed first in the shot-put competition at the AISA State Championship Track Meet and Lowndes Academy will be awarding him as MVP for track on May 3.

The 6-foot-2 senior won with his throw of 43-feet and 11-inches, only five feet and six inches away from the record. Since 2000 the record has been held by Lowndes Academy alumni Michael Cobb.

Renfroe also participated in the discuss throw with an astonishing 116-feet and six-inches which individually contributed 16 points to his team’s total.

“We had hoped to add distance to Russ’s throw after seeing his achievements last year,” said Cobb. “Russ spent a majority of his time training himself.”

The event was held at Ralph “Shug” Jordan Memorial Stadium in Selma from April 21-22 and was host to numerous schools.

Lillian Goodman of Lee-Scott Academy achieved the state record in the Girls’ 3200 Meter Run with a time of 12:08.89.

Rachel Gomes of Morgan Academy set a state record of 47.03 in the Girls’ 300 Meter Hurdles and was the athlete who earned the most points of the girls with 31.5 points.

Daniel Nolan of Ft. Dale Academy received the most points among the male athletes with 34 points.

Renfroe will be graduating this year and has made plans to attend Trenholm Tech to pursue a career in Industrial Maintenance.

Lions baseball rounds out as Class 1A Area 5 Champions